For those that don’t know (and I usually mention it in my talks), I am hard of hearing, and earlier this week I tweeted this:

Over the following few days it earned an astonishing amount of attention compared to what I expected (as of Aug. 1st): 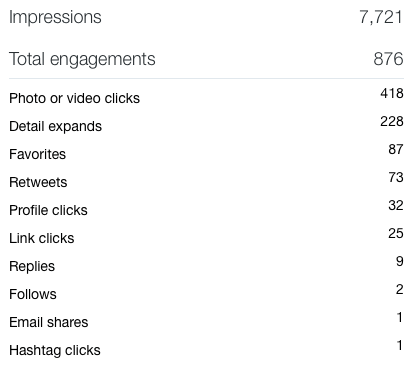 I figured in light of this, folks might be interested in learning a bit more about Made for iPhone (MFI) Hearing Aids.

While there are many non-MFI Bluetooth hearing aids that will pair with the iPhone, they are treated more like a bluetooth headset than an assistive listening device. This means that you can route audio to them, just like bluetooth headphones. Some support Bluetooth 4.0/BTLE, A2DP, and such what. These are pretty awesome as-is. You can pair them with any number of BT enabled devices, with no restrictions beyond technical incompatibilities.

MFI Hearing Aids on the other hand are Apple certified hearing aids that are intended to connect via Bluetooth to an iPhone, iPod Touch, or iPad device (I use an iPhone so I’ll just use that here). Due to being MFI, they integrate much more closely with the OS. Unfortunately, this bluetooth connection seems to have a proprietary handshake that disables them from connecting as generic bluetooth devices to other types of devices (this is my biggest issue).

I have the Resound Linx 961’s. I want to write a note about the cost, because it was impossible for me to find a price without seeing an audiologist: without any kind of insurance, these things run about $7400 (a pair). With my insurance, which has an agreement with a large national discount program (but not actual coverage), they were $5200. Having worn them for a year, while I was hesitant at first, these really have had a hugely noticeable difference in my life, and especially when it comes to music, which is extremely important to me.

With these, I can pipe music, videos, turn by turn directions, phone calls, and pretty much all audio directly to my ears. And while the quality isn’t the best, I now always have a way to privately listen to music on the go.

These things are tiny, as you can see below, and the batteries are standard size 312’s, which last 3-5 days. Unfortunately, no recharging here — it’s just too small.

I say “pretty much all audio” because there are a couple of things that baffle me: No matter what, the FaceTime/FaceTime Audio outgoing dial tone always plays through the phone speaker. Inversely, the Find My iPhone locator ping plays through my hearing aids — less than useful when trying to find my iPhone in the couch! (Both of these issues are still present in iOS 9 PB 2)

This integration takes a number of forms, but it all pretty much comes down to two places:

Settings app > General > Accessibility > Hearing Aids (this option has moved down the screen in iOS 9, but it’s still there). In iOS 8 and 9 this will be where you pair the hearing aids, you cannot pair them in the general bluetooth preferences.

Additionally, you can enable access to the controls from the look screen, and turn on Hearing Aid Mode (which I don’t use, this seems to be for traditional hearing aids when using the phone). 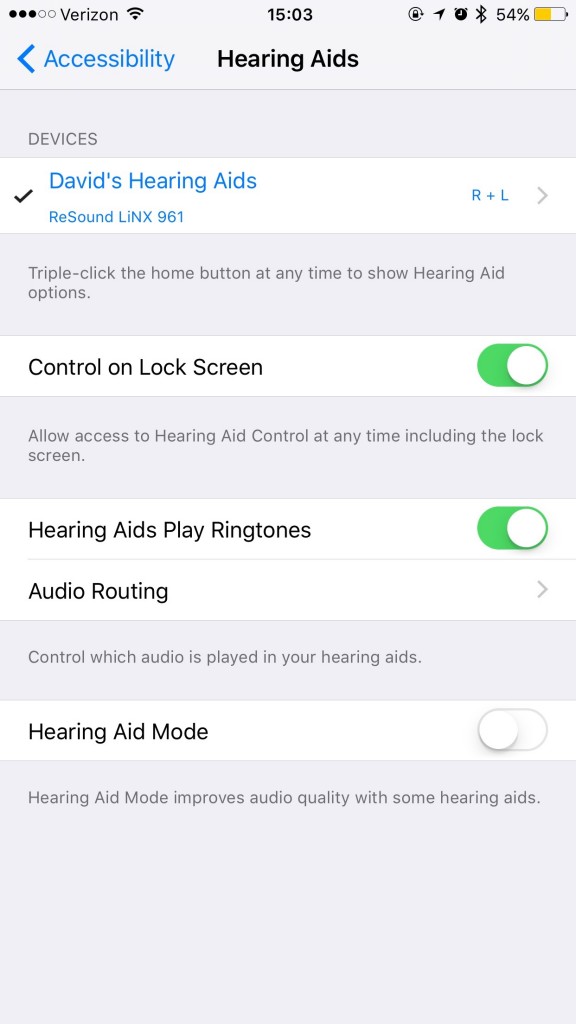 Choosing my hearing aids gives me more information and settings: 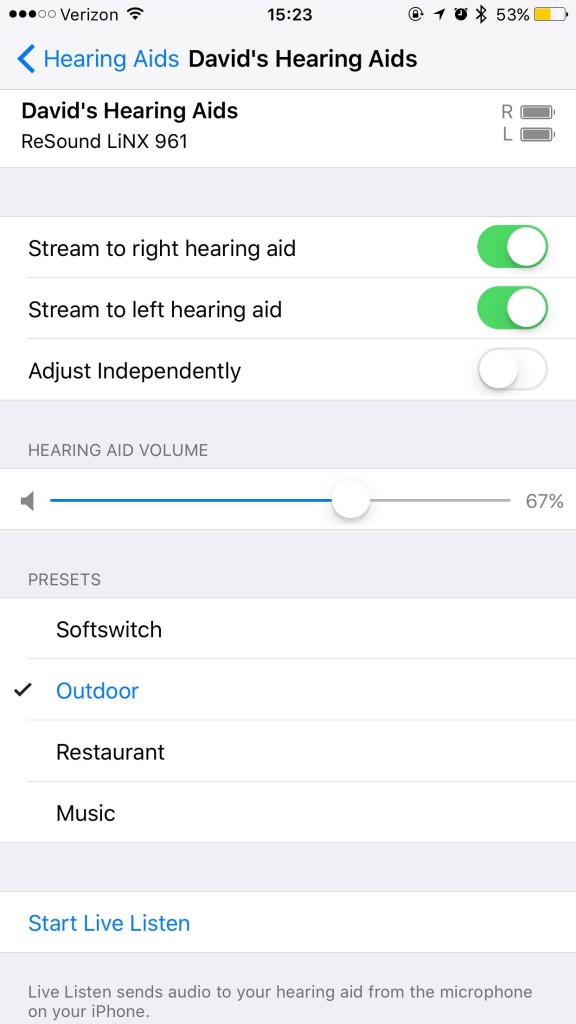 In particular, you can see the battery level (yes, 5 taps deep, as opposed to in the Today overlay…), the ability to choose which hearing aids I stream to, whether the volume can be adjusted independently, which preset I’m using, and the Live Listen feature (I’ll cover this in detail later).

Furthermore, in iOS 9, they added two new options, “Hearing Aids Play Ringtones” (which will make it play your incoming call ringtone) and “Audio Routing” which lets you decide where Call Audio, and Media Audio is routed by default. 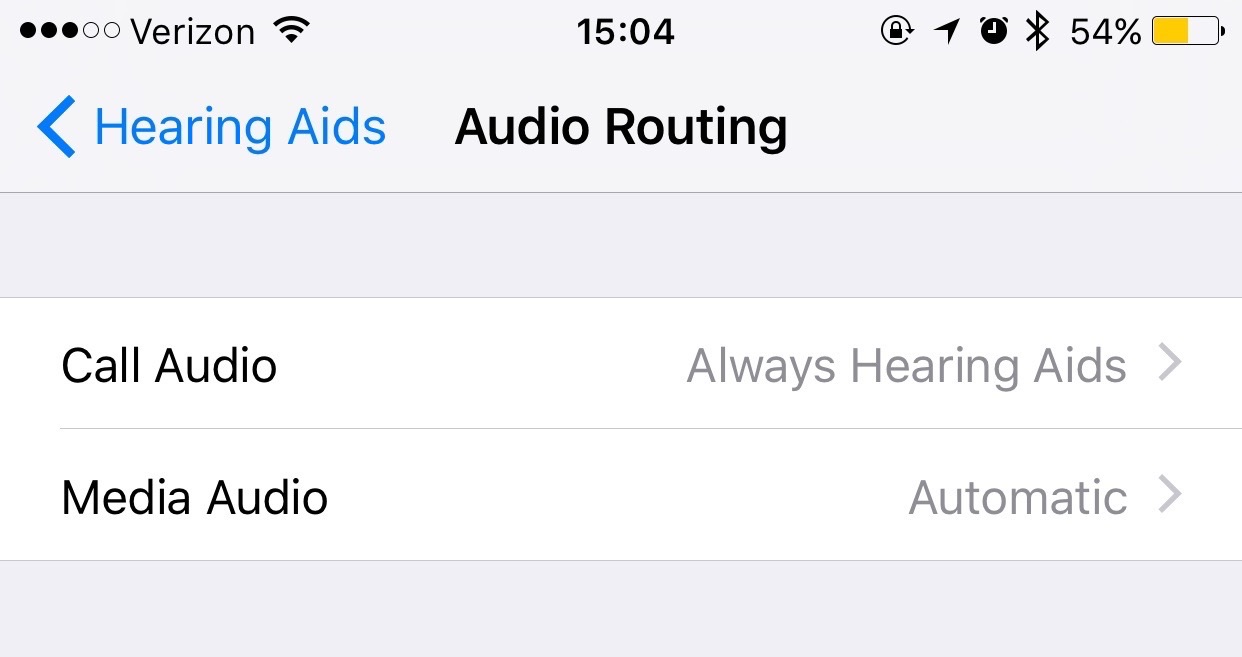 Hopefully this last setting will solve the issue I have in iOS 8 of audio jumping between my hearing aids and my car stereo which is also connected via bluetooth — sometimes they fight for control, and as you can imagine, that’s very frustrating.

The second integration point is around the triple click of the home button. A triple click will show the accessibility menu, which will include the Hearing Aids option: 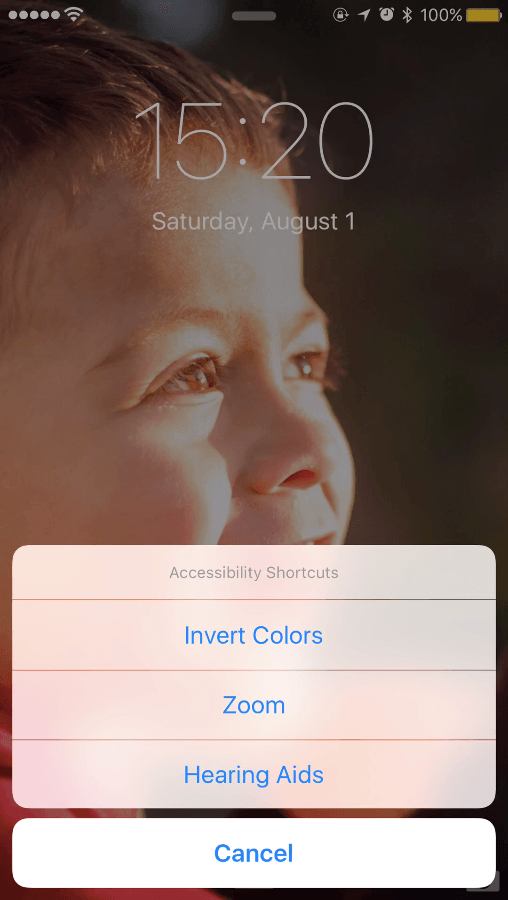 Choosing this option will then bring up a whole host of settings. Mostly the same as are available through the settings app, but globally available (including, optionally, on the lock screen), and in my opinion, better organized: 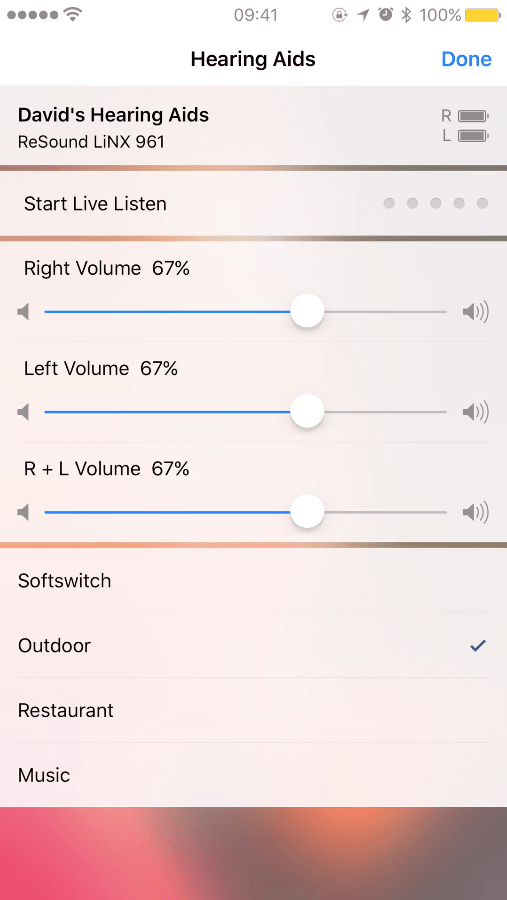 Here we have the battery levels (triple click + tap), independent volume (regardless of the setting above) and combined volume, preset option, and again, Live Listen.

I use this screen approximately a billion times a day.

The presets are actually why I love these devices. These particular ones can have 4 different presets, and there are many to choose from (though they have to be setup by an audiologist, and they can be tweaked individually). Presets are realtime audio filters, that will enhance the audio on it’s way to my ears.

In my case, these presets are:

If we’re having a conversation, and you see me reach behind one of my ears, or fiddle with my phone, it’s actually me trying different presets to make your voice as clear as possible in whatever situation I’m in — it’s not perfect, sometimes Outdoors is great in crowds, other times Music is the best option to be able to hear (I find that when listening to anything through a PA, Music works better).

Another feature, which I really don’t use, but is still pretty cool, is the Live Listen feature. This lets your iPhone act as a remote microphone. Simply place it near the person/thing you’re trying to hear, and it will stream whatever the microphone picks up directly to your hearing aids via bluetooth.

In addition to all of this, through the accompanying app, you can also change the treble and bass, as well as set geo-fences for automatically switching programs (and treble/bass) based on location.

All-in-all, I’m super glad I made the plunge to get hearing aids (again), they have had a remarkable impact on my life, and the technology packed into these things is crazy. They’re almost invisible, and I’ve had many people say they would like the abilities of these even if they have good hearing!

I hope this post shows you just how cool we’ve come with the technology, and that if you have avoided them till now that you consider getting something like this.

I also evaluated the Resound Linx 700-series, and the Starkey Halo. I settled on these as having the best features and app.

However: while looking stuff up for this post, I came across the Kirkland Signature™ Hearing Aid at CostCo, which looks to be the same device branded under another name. These run just $1799 a pair! I was also reminded that there is an additional piece of hardware to allow generic bluetooth connections, as well as connecting to things like TVs and streaming to the hearing aids.

A sudden realization of freedom…

Cube°n for NetBeans on OSX (and others)

Your Slides Do Matter