A little off the beaten path for me, but I’ve been meaning to write about this for a while.

One of my favorite books this year – recommend by my boss, has been Good to Great: Why Some Companies Make the Leap… and Others Don’t

The book is a study (which is, by the way, far from dry and boring) into companies that have made the leap from being Good to being Great. So what companies made the cut? Coca Cola? (the most recognized brand on the face of the planet), Microsoft? Nope. In fact, none of the companies you’d expect to be in here, are in here; so strict were the selection criteria.

After establishing a definition of a good-to-great transition that involves a 10-year fallow period followed by 15 years of increased profits, Collins’s crew combed through every company that has made the Fortune 500 (approximately 1,400) and found 11 that met their criteria, including Walgreens, Kimberly Clark and Circuit City

If you have time to read this book (and it shouldn’t take long) I highly recommend it.

There are several key concepts described in this book, and I’d like to share some of them (briefly) and my take on them:

Jim came up with a way to classify the abilities of company leadership, this boils down to a scale of Level 1 through 5. Great companies require Level 5 leadership.

Level 5 leaders will push all praise aimed at them, onto the people around/below them – “Oh, I didn’t do anything, my staff were the true force behind this” – whilst taking full blame when something goes wrong. That is, praise is directed away from them, blame, pulled in by them.

There is one particular CEO currently about that you might peg as being one of the best around, Steve Jobs. Nobody can deny that what he has done for Apple as a company is anything but astounding. However, as had been said by just about every mac geek when a rumor comes to light that he might be leaving “Apple will fail without Jobs!”. This is because he is a Level 4 leader, very good at his job, but he does not exhibit the stockdale paradox.

This is why a recent call has gone up for him to announce his successor, a clear line of succession will be needed to make sure Apple doesn’t slip once Steve retires.

A Level 5 leader will typically become a mentor – and probably not meaning to – to his eventual successor, and the successor will be chosen naturally as the obvious fit in his predecessor place.

First Who, Then What

Great companies will first assemble the right team, then they will decide what they are going to do.

In contrast to the good-to-great companies, which built deep and strong executive teams, many of the comparison companies followed a “genius with a thousand helpers” model. In this model, the company is a platform for the talents of an extraordinary individual. In these cases, the towering genius, the primary driving force in the company’s success, is a great asset as long as the genius sticks around.

The “Who” process is what Jim calls “Getting the right people on the bus”.

Look at some of the recent great successes, for example, Google. Larry Page and Sergey Brin didn’t set out to create Google, the #1 search engine in the world, they were the right people, and then they said “I want to do something cool… what?”

(read more on First Who, Then What)

The Hedgehog Concept, far more-so than the two above, was the big concept I took away from the book. This, was the defining thing for me, when it comes to going from Good to Great.

In his famous essay “The Hedgehog and the Fox,” Isaiah Berlin divided the world into hedgehogs and foxes, based upon an ancient Greek parable: “The fox knows many things, but the hedgehog knows one big thing.”

What this means is, are you a Jack of All Trades, doing lots of things with competency, or are you the best in the world at one thing, and one thing only? Only the latter (and finding it) can give you a Great company.

The Hedgehog Principle, as Jim illustrates it, reminds me very much of a Venn diagram, it is the intersection between 3 things: 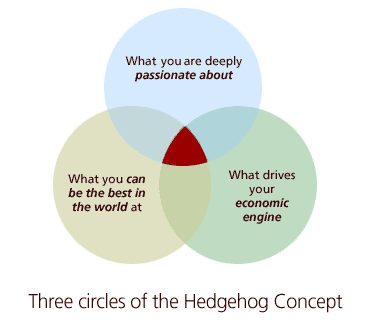 The thing that falls into this intersection, is what you and/or your company needs to focus on.

For me, this is PHP and web development. What is it for you, personally, and for your company?

Read more on the Hedgehog Concept, and more still

Again, I highly recommend Good to Great: Why Some Companies Make the Leap… and Others Don’t

by Jim Collins, and you can also read more before you do at Jim Collin’s own website.

I recommend for everyone who has a mild interest in business, freelancers, startups, et al;

Thoughts about Rails 2.0 (from a PHP developer)